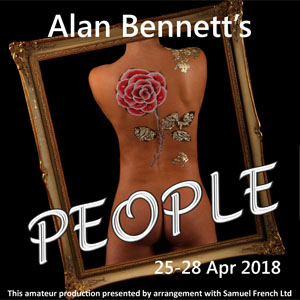 Dorothy’s inheritance is an old, run-down mansion she can’t afford to maintain. The play follows various attempts by her and her sister to resolve the issue. These include “gifting” to the National Trust; selling to a property developer, and film-making (of a less than salubrious nature where Dorothy is clearly aware of the comings and goings in the four-poster bed). Underground rumblings from a disused coalmine, the discovery of a large number of (still full) chamber pots and an untimely visit from the Bishop make for a show full of fruitful conflict.

People completed its National Theatre tour in 2015 and BCP are one of the first amateur companies to perform this entertaining, funny and touching play where Bennett successfully blends satire with nostalgia to produce a thought-provoking piece of theatre.

People will be performed at The Mill Arts Centre, Banbury 25-28 April 2018. Directed by Ray Atkinson.

Just before the production in April 2018 Director Ray Atkinson published several articles via Facebook.
They can also be seen here:

The Reviews are in