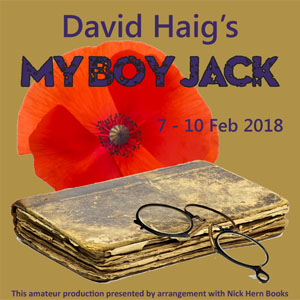 A powerful and moving account of the anguish at the heart of a man whose storytelling continues to delight millions the world over.

My Boy Jack was performed at The Mill Arts Centre, Banbury 7-10 February 2018. Directed by Helen Watson and Kerrie McCormick.

The cast was as follows …

1913 : an introduction to 15yr old Jack Kipling, his defective vision, how he is desperate to get away from home, and how his father is determined to send him to war. A bitter family conflict is triggered leaving Rudyard – a renowned patriot – devastated by the warring of his greatest passions – his love for children (particularly his own) and his devotion to King and Country.

1915 : Jack does go to war – aided by his father’s influence – and is declared Missing In Action. We see Rudyard’s guilt at having helped Jack enlist.

1924 : Rudyard is interviewing soldiers from Jack’s regiment. One recalls his last moments – leading a charge against the German trenches, continuing the attack while the others dropped off in fear, killed by machine gun fire as he reached enemy lines. Kipling takes bittersweet solace knowing that his son died heroically.

There are some more photographs here with thanks to Mike Watling.