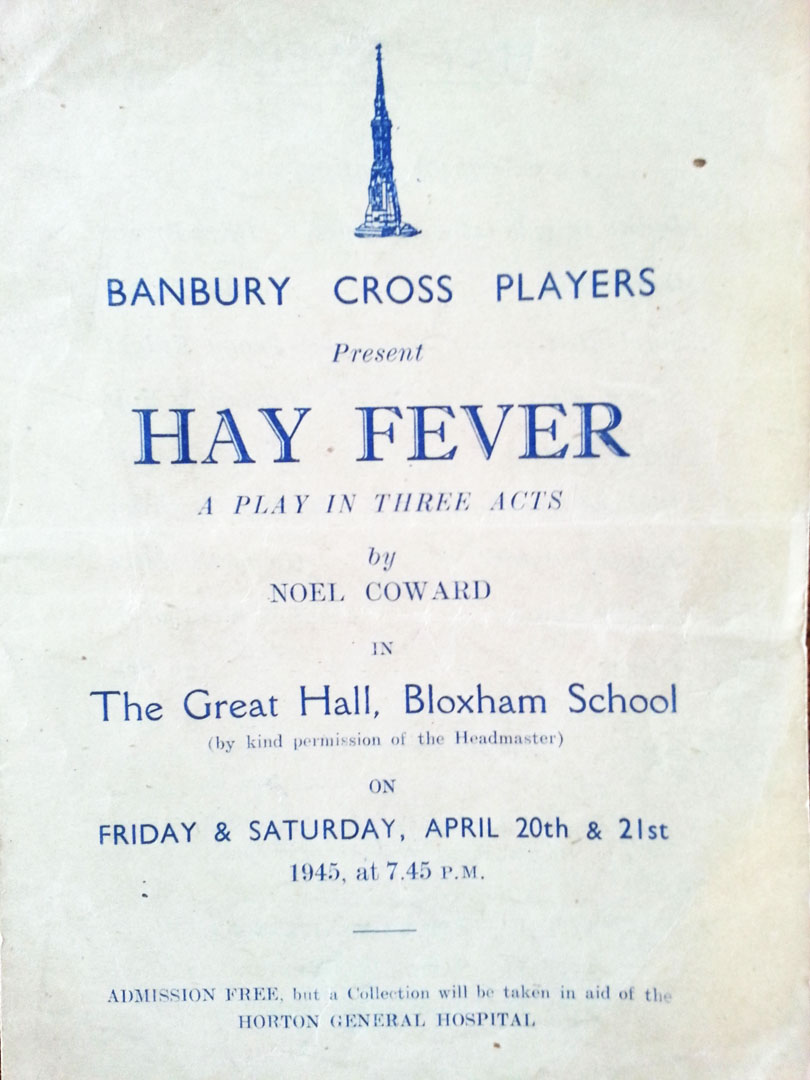 Banbury Cross Players has been providing amateur drama in Banbury for 75 years. That year an enthusiastic group of people had been getting together for play readings. It was decided that it might be fun to perform a play and, as they say, the rest is history. BCP have been entertaining audiences with a wide range of productions ever since.

Starting at the end of World War 2

The first production by BCP was Noel Coward’s Hay Fever, performed in April 1945. Unfortunately no hall could be found in war time Banbury, but the then headmaster at Bloxham School generously offered the Great Hall. In spite of petrol restrictions the support from the public exceeded all expectations – people travelled by train, bus and bicycle. Some even walked!

Much encouraged the society then looked for a Banbury venue in which to perform. First came Christ Church Hall (now Oriel House in Broad Street) and then, in 1947, one production, Blithe Spirit, was performed at Banbury Grammar School (now Wykham Park Academy). After this the next thirteen productions were housed in Banbury Town Hall until 1952 when BCP moved into the Church House where they continued to stage productions until 1961.

You can read more about the earliest days of Banbury Cross Players in the article Look Back With Little – All the World’s a Stage written at the time of our 70th Anniversary.

During the early fifties BCP performed a successful production of Little Red Riding Hood (1953). This showed that there was a need for an annual pantomime in Banbury. In January 1954, 2,500 people came to see Cinderella. This was not a mass produced show with off the shelf scripts but was truly “made in Banbury”. Everything: script, music, choreography, scenery, production and, of course, the cast and crew was home grown. Each year until 1961 two full length plays and a Christmas play or pantomime were produced at the Church House.

In 1961, the Society staged Ring Around the Moon at the recently opened North Oxfordshire Technical College. Here a large stage and modern facilities, provided the opportunity for BCP to put on larger and more adventurous productions. Such things as a live horse (more of a pony really) drawn carriage, a steam train, cars, flying equipment and a revolving stage were all introduced as BCP continued to develop its skill and expertise. In October 1970 the Society put on two productions – Live Like Pigs and On Approval – in the same week. They were performed on alternate nights with a complete set change carried out by members of the society after the audience went home. Any member of the audience who found themselves booked in on the wrong night might have found they were staggered by the absolute realism of one, when they had hoped to enjoy the sophisticated 1920s comedy of the other.

For several years BCP produced a wide range of successful open air productions. We performed in surroundings such as Broughton Castle, Wroxton Abbey and, in more recent times, Overthorpe Hall. One ‘Titania’ had to swim the castle moat to make her entrance. Another arrived on stage on a bicycle having ridden around the Abbey grounds. In the middle of a production an actor might well have found themselves competing in volume with American F1-11s or the drone of the M40.

Audience members would arrive early clutching large picnic hampers, umbrellas and waterproofs. The show would go on whatever, and it did. Torrential downpour was no excuse to stop mid performance or to cancel, even if this meant a cast continuing to perform whilst wearing large plastic bags. And the audience always stayed until the end, no matter how wet or cold they became. Due to the unpredictability of the weather and the expense of such shows, at present, BCP no longer perform outdoors. It was, therefore, somewhat ironic that in July 2007 BCP’s production of The Dresser had to be cancelled. After two performances the storms flooded the venue. Our November 2012 production of Calendar Girls only made it as far as the Dress Rehearsal before more rain and floods stopped play.

The Mill Arts Centre has been BCP’s home since October 1990. The Society now produces four full length plays each year. Over the years Banbury audiences have seen BCP performing classic productions such as Hay Fever, An Inspector Calls, The Crucible, and Ghosts; modern plays such as Lovesong, The Cripple of Inishmaan, Dracula, People and The 39 Steps; comedies from Shakespeare to Alan Ayckbourn; thrillers; historical dramas; pantomimes; children’s plays; as well as venturing into the world of musicals with productions of Cabaret and Chicago.

In recent years BCP have found themselves performing an excerpt of their production of Wyrd Sisters on stage at the RSC. We also ventured outdoors to perform Twelfth Night at Sulgrave Manor. Bite Size, a recent new venture for BCP, has also performed in a variety of community venues – a cafe, a brewery and care homes. BCP have also involved themselves in local One Act Play Festivals at Lighthorne and Abingdon. A win at Lighthorne Festival in July 2019 with the play Contractions saw the production team then go on to pick up the Adjudicator’s and Backstage awards at the NDFA British All-Winners 2019 Festival at the Rhoda McGaw Theatre, Woking. Excitingly, BCP are planning a four night One Act Play Festival in July 2020 to celebrate their 75th Anniversary year which local groups are already booking to perform in. There have also been one or two changes at The Mill Arts Centre in recent times. BCP performances now begin at 7.30pm; ticket bookings can be made online and BCP audiences can also enjoy the comfort of the new seating when watching productions.

For 75 years BCP have been contributing to the rich diversity of entertainment in North Oxfordshire. In the early days the Society quickly earned a reputation for the fact that there was nothing ‘amateur’ about their productions. BCP has grown and developed over the years but continues to maintain the highest dramatic standards set by their founders. Their desire is to continue entertaining local audiences for many years to come.