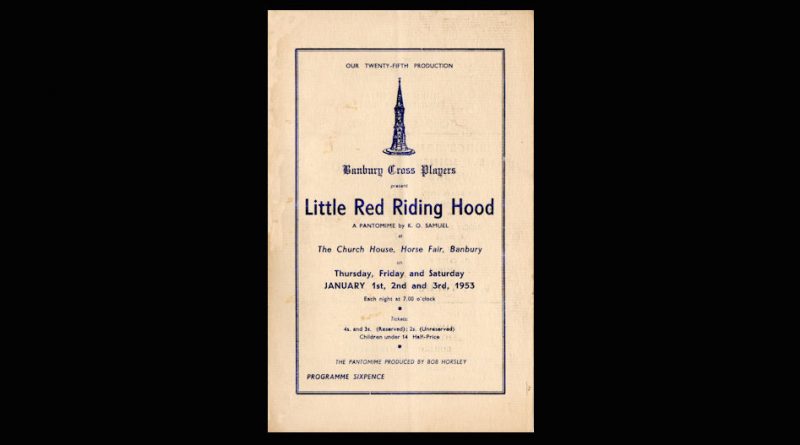 It was announced in the programme of The Flashing Stream in October 1952 that “The society are assisting in the production of a Pantomime by the Charity Players at the Church House, Banbury on January 1st—3rd 1953 in aid of the Banbury Boys’ Club.” There is no reference to the Charity Players in the Pantomime Programme or newspaper reports. It therefore appears that Banbury Cross Players may have taken the production over at a late stage. The programme does show a reference to the Banbury Boys’ Club.

So the Banbury Cross Players Dramatic Society is human after all.

Wide its field of achievement has been in the years of its existence. Versatile, and with an ever increasingly high standard of acting production and presentation, the Players have offered much excellent entertainment to appreciative playgoers.

But recently, faint but definite signs had appeared that the selectors had taken their finger off the public pulse. A disturbing thought for all concerned.

The society started as a small one, performing more or less for the amusement of its members. It has grown, by sheer hard work and ability, to an established acting group with an ever increasing reputation, and ever expanding audiences.

But audiences are odd things. They will not easily be educated, or pushed into seeing plays, however excellent, that do not entertain them. And while opinions must differ over the merits of any play, the customers make their feelings clearly evident at the pay desk. And the pay desk is the artery on which the fingers of the selection committee should be firmly and responsibly taped.

The Society has an enthusiastic following — but followers are fickle if they do not get enough of what they want. And what the customers evidently want to do, with almost pathetic eagerness is LAUGH.

Banbury Cross Players acknowledged this fact last week, and for the first time in many months, gave them the chance—and raised their own stock immeasurably by so doing.

They put on a Pantomime—”Little Red Riding Hood”—at the Church House last Thursday and Friday and twice on Saturday. Every seat sold out and many people had to be turned away.

And what a rollicking good show it was. Pantomime, by tradition must offer comedy, music, glamour, dancing, colour and spectacle. “Little Red Riding Hood” had all that in full measure, plus an incredible amount of enthusiasm and gusto from the cast.

It was briskly paced and warm and folded itself right round the very responsive audiences.