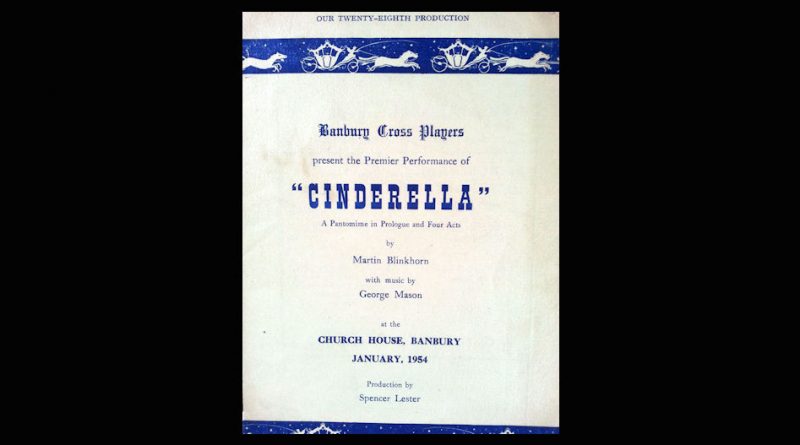 In January 1954 Cinderella was billed as Banbury Cross Players’ 2nd annual pantomime. It took place over 9 performances (including 2 matinees) at Church House, Banbury. A total of 2,739 people saw the show and it was reported that 500 were turned away.

This pantomime was written by member Martin Blinkhorn and music written by George Mason. Directed by Spencer Lester. The cast was as follows…

Everything about Cinderella was created by members of BCP. The Script including the words for some of the songs was written by Martin Blinkhorn and Music written by George Mason. To top it all, songs were published as sheet music. The script was professionally printed and bound as a soft-back book. We have copies of sheet music and scripts in the archives. The style of the front covers of sheet music, script and the programme match with the coach and horses border.

MADE IN BANBURY, but
THIS TIME IT’S PANTOMIME

Dropping our current series of local-industry articles for a week, we shift the “Made in Banbury” tag to entertainment – to pantomime, in fact.

For nothing can better qualify for the “home-made” description than “Cinderella” – the Banbury Cross Players’ show at Church House which 2,500 will see before the end of the week. And just as “home-made” is so often a better symbol of quality than “mass produced”, Cinderella is a better than many a show to be seen on the professional stage.

It is all as exclusively “Banbury” as Banbury Cross-script, music, choreography, scenery, production, and of course the 50 performers; everything, everybody.

To start at the beginning. The script Martin Blinkhorn has woven around the familiar plot of the fairy story is everything a script should be … the words always carrying along the action, with plenty of opportunity for dancing and songs, for the spice of knockabout and for all the colour that makes up the traditional magic of pantomime; with plenty of wit and humour, local and topical allusions which everyone “up with the news” can appreciate.

The music – songs, dances and interval music – was written entirely by George Mason, whose catchy tunes will be hummed and played long long after the final curtain rings down on Saturday night … Cinderella’s “All Alone”, Prince Charming’s “Now that I’ve Found you” and “Say Yes”,
Alice’s “I was a Fool”, the communal “Rumplety Tumplety” and “That’s Happiness”, and the final “Cinderella’s Wedding Day”.

No better sets have been seen in Banbury than those designed and painted by Julian Braggins. Their realism is a fitting background to the skill of the performers.

Daphne Judd’s choreography is delightful. She devised the dance routines and costumes for the 30 dancers, and under her direction even the youngest – and some are no more than six – perform with the utmost self-possession, precision and appeal.

With some first-class basic material to work on, any reasonably qualified cast could put on a seeable show. That cast does much more is a tribute both to them and to the producer, Spencer Lester.

The production of a pantomime has more complications than a normal play. Fate was unnecessarily cruel, therefore, to Spencer Lester when after the first night he was robbed of one of his comedy successes – Bob Horsley, one of the Broker’s Men. Bob broke his leg on his way home after the show on Thursday. Into the breach stepped – Spencer Lester.

Then, after Saturday’s matinee, Martin Blinkhorn collapsed. As Buttons he had one of the biggest parts. At half an hour’s notice, again into the breach stepped – Spencer Lester. And the part of Broker’s Man was handed on to Oliver Robinson.

That both gave first-class performances – with no allowances being made for their unpreparedness – is sufficient tribute to their ability and versatility.

Now the cast all have their fingers crossed. Will there be a third “casualty” before the run ends next Saturday night?

It would be unfair to Martin Blinkhorn (and no-one will agree more than the producer) to suggest that he was not missed. As Buttons (Baron Stoney-broke’s general factotum) he had shown a touch of near-genius that had lifted the part to a high level. He expects to be back in the cast tonight (Thursday).

The name part of Cinderella is taken by Valerie Holmes. She could not be better cast. Pretty, petite and appealing, either in rags or sparkling ballroom gown, she is the Cinderella we all know, added to which her singing is as sweet as her dancing is expert.

As for Prince Charming (Betty Enstone) and his aide-de-camp Dandini (Margaret Miller), their traditional costume does no more than it should to de-sex two such personable “Esquire” girls. Valerie Duke is an enchanting Fairy Godmother, and Alice (Sheila Acrid) lived right up to the programme note “an aspiring barmaid with the right ideas.”

As Baron Stoneybroke, Cinders’ father, John Hill is more than adequately overwhelmed by his Baroness and the two Ugly Sister daughters. His revolt scene after the ball is delightful.

Demon Toothache, so colourfully sinister that he has the younger children cowering in their seats, is played magnificently, literally magnificently, by Arthur Stevens; and the red-coated footman (Julian Braggins) makes the most of his “fall flat on my face” comedy chances.

There must also be praise for the effectiveness of the various technical contrivances, notably in the transformation scene.

The Banbury New Light Orchestra, under the direction of Tom Hutchings and with composer George Mason himself at the piano, provided spirited accompaniment, incidental and interval music.

The whole show is so successful that criticism on minor points would be churlish, and, truth to tell, there were few enough of those beyond an occasional timing slip and one character who might be said to be under-produced. But one thing is certain – there will be no spare seats for the next three nights.