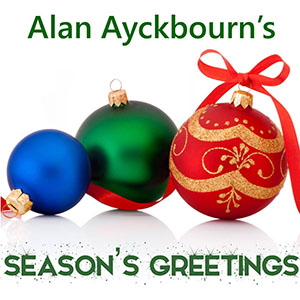 Petty (and not so petty) squabbles abound. Christmas presents are rifled. Mechanical toys are set off. Hilarious highlights include a drunken game of snakes and ladders, a chaotically incompetent puppet show and a midnight love scene.

One of Ayckbourn’s classic early works with themes still familiar today. This farcical comedy about four days in the life of a dysfunctional family is a great way to start your countdown to Christmas!

Season’s Greetings was performed at The Mill Arts Centre, Banbury 8-11 November 2017. Directed by Trish Thompson.
The Cast was as follows …

On Video The opening and second night audience give their thoughts on BCP’s Christmas offering!

Photos from the Tech Rehearsal with thanks to Mike Watling.