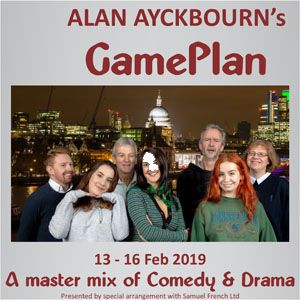 GamePlan by Alan Ayckbourn was performed by Banbury Cross Players at The Mill Arts Centre 13-16 February 2019. It was directed by Liz Riley.

The Cast was as follows

Teenager Sorrel fights to keep herself and her abandoned mother, once a dot.com businesswoman, financially afloat by setting up as a part-time prostitute, advertising for clients on the Internet and persuading her tearful school chum to act as her maid.