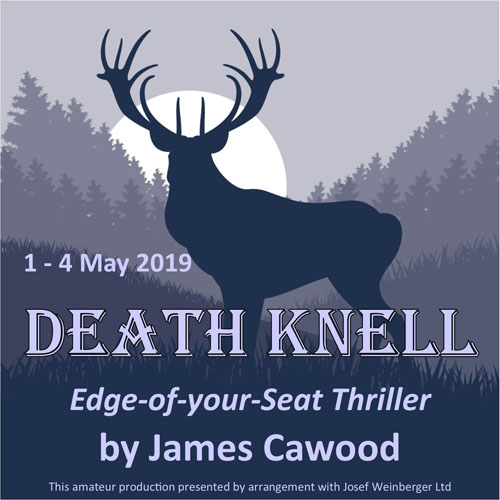 Death Knell by James Cawood was performed by Banbury Cross Players at The Mill Arts Centre, Banbury from 1st and 4th May 2019.
Directed by Linda Shaw, the Cast was as follows:-

Successful Playwright Henry Roth takes delight in telling his neurotic wife, Evelyn, he has a new, ‘seismic’ play to unleash on the theatrical world. To prepare for its stage debut, he has invited the charming and charismatic (but unknown) actor, Jack Willoughby to their remote Highland home to prepare for the leading role of murderer. Jack’s arrival sends Evelyn into a flat spin when she realises he is her lover – a relationship developed during her time supposedly in rehab in London. Is Henry aware of the relationship?

With the arrival of Inspector Lazan from Scotland Yard – apparently on the hunt for the Highland serial killer, The Ghoul – the play takes another turn. Is he who he claims to be? In a breath-taking script, sending the audience reeling from one plot twist to another, the genre of “Thriller” is taken on an exciting new journey.

Photos with thanks to Mike Watling

Death Knell Photos with thanks to Mike Watling