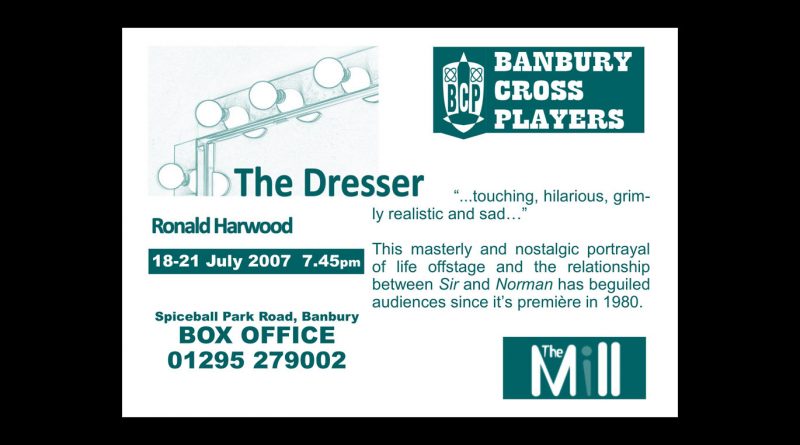 Banbury Cross Players presented The Dresser by Ronald Harwood at The Mill Arts Centre in July 2007. Unfortunately flooding caused the cancellation of two out of four performances.

Directed by Clare Lester the cast was as follows

The Mill Arts Centre was flooded in the early hours of Saturday 21st July when the River Cherwell burst its banks between the Spiceball Sports Centre and the Thames Water pumping station. This followed a period of exceptionally heavy rain which affected the whole of the region on Friday 20th.

The first indications of a problem occurred on Friday morning when the main sewer under the road began to overflow through a manhole outside The Mill. The sewer runs between The Mill and The Sports Centre and into the pumping station beside the river and has overflowed several times previously. Water, contaminated with sewage, floods the car parks when the manhole cover is completely removed by the force of the water – as happened on this occasion.

Thames Water, aware of this issue and of concerns expressed by Local Authorities, The Mill Management Committee and The Environment Agency, and responded by putting staff promptly on hand to manage and monitor the situation. They placed sandbags to divert the flow away from the buildings and to offer some protection to the doorways at the side of The Mill threatened by the water accumulating in the car parks.

As the day progressed, it became clear a more serious threat was developing from the rapidly rising levels of the river itself. At about 2.00 pm a decision was taken to close The Mill to the public. Similar steps were taken by the Sports Centre. Mill staff contacted other users of the building and staff and volunteers from Anjali, Banbury Cross Players and The Youth Service assisted in the efforts to clear as much of the ground floor area as was reasonably possible. The Building was then made secure and closed for the night. The Dresser by Ronald Harwood was therefore cancelled

By Saturday morning, the river had burst its banks and was flowing across to the canal creating an extensive area of floodwater badly affecting both The Mill and The Sports Centre. The levels were approximately a depth of three feet throughout the ground floor.

The river reached its peak around 7.00 am and, although levels continued to fall all day, no access to The Mill was possible because of the depth of surrounding water. By Sunday morning the water had receded and entry was gained to the building. As expected the whole of the ground floor was covered with a slimy foul smelling residue from the sewage contaminated water and the timberwork (including fire doors and theatre floor) were showing the signs of severe water damage. Representatives of Oxfordshire Country Council (owners of The Mill) advised that any items contaminated with flood water should be destroyed.

Banbury Cross Players were allowed access to The Mill on Wednesday 25 July to de-rig and remove properties, scenery and costume which had been in place for their Production.

A dehumidifier was hired on 26 July 2007 and placed in the Banbury Cross Players Workshop to start the process of drying out. During the weekend of 5/6 August 2007, Banbury Cross Players cleared out the Workshop and removed sewage-contaminated items of scenery and supplies. These items were removed to a local farm for incineration.

Flooding has been a recurring problem at The Mill. Since The Dresser we have lost 2 productions to flooding – Calendar Girls in 2012 was eventually presented a year later – The Thrill of Love 2019 cancelled due to flooding is now scheduled to be presented later, but may be cancelled again due to Covid.

Photos taken after the flood