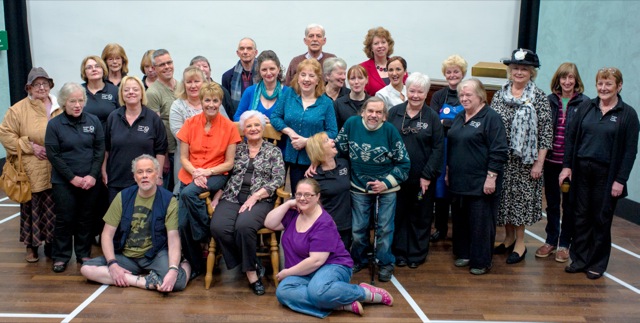 Calendar Girls by Tim Firth was our November 2013 production. It was about to be performed in November 2012, but had to be postponed for one year as a result of flooding at The Mill Arts Centre. Directed by Clare Lester, the Cast was as follows:

(A report written for AMStage)

“Be a part of an incredible theatrical phenomenon” said Banbury Cross Players’ Audition Notice for their 2012 production of Tim Firth’s Calendar Girls. With a history of almost 70 years producing live theatre in Banbury, Oxfordshire, the town’s Amateur Theatre Company were determined to be part of the global fund-raising for Leukaemia and Lymphoma Research. Despite the fact that two other local companies were performing the show, BCP were confident their supporters would want to see the production at their “home” theatre at The Mill Arts Centre.

Having scheduled the production for November 2012 as the opener to the 2012/13 Season, the work began. Experienced Director, Clare Lester auditioned in June 2012. The casting panel auditioned 29 actors and listened to 59 audition pieces over two evenings. The play was cast – welcoming several new members and encouraging a former member to return. In the BCP newsletter in September 2012, Clare said “There are many challenges ahead of us before 23rd November but I know BCP members will rise to the occasion” .. little did she know!

By October 2012, things were moving on apace. We had drafted in a local Tai Chi guru, cast and crew were working hard and the publicity machine was at full tilt. Clare commented “I am thrilled to have had so much interest and support for this production as nudity isn’t usually what’s called for in Amateur Theatre! Lynden Players offered us props and I’ve had a message from a company in New Zealand asking about our set design.” The exchanges between Clare and Kathy Ghent from New Zealand are a story in themselves.

Saturday 17 November 2012 came around and we ‘moved in’ to the theatre. We spent Saturday and Sunday building the set, bringing in the overwhelming array of props and costume, and rigging the lighting. First rehearsal on set was Sunday evening. Monday and Tuesday evenings were Tech rehearsals and Wednesday was an evening off before Dress Rehearsal on Thursday. Opening night was Friday with a further show on Saturday then Wednesday to Saturday the following week.

BCP are not unfamiliar with flooding at The Mill, having had two productions affected – The Relapse in 1997 and The Dresser in 2008. The Mill sits gingerly in the space between the Banbury Canal and the River Cherwell. Improvements to flood defences have improved the situation but clearly not enough to cope with the deluge we experienced that week bringing the devastating news on Thursday 22nd November that the building had suffered once more and, although the theatre itself had escaped undamaged, the clean up operation meant the building would be closed for at least a further week.

Our Executive Committee and Clare met on Friday 23rd to consider our options. It was a highly charged and emotional meeting – this was supposed to be our opening night!

Three alternative venues were considered. Two were discounted as not having the necessary space/setup (we had projection, for example). The third was considered a little too far out. It was clear that an alternative venue would be difficult to move a complete production to – the staging and direction had been designed specifically for

The Mill. Two of the alternatives were local schools which also limited us in terms of available dates.

Discussions with The Mill took place the following week. Their already busy programme in January/February made it difficult to find an alternative slot. Leaving it any later made it difficult from a rehearsal point of view. Do you stop rehearsing and then pick up again or continue for such a long period of time?

A further meeting of the Exec and Clare that week came to the difficult decision to postpone the production until the following November – when we would again be able to have two weeks in the theatre (our three other slots are only for one week).

Our Box Office is managed entirely by The Mill and they could contact ticket-holders who they had contact information for. This was not without difficulty as we had to re-think a ticket price increase scheduled for 2013. We also had around 50 “friends of BCP” to update and work out their ticket re-booking. Eventually, The Mill wrote to everyone they had contact details for who had booked for the 2012 production advising them that tickets would be automatically re-booked for the same performance nights for the 2013 production unless otherwise advised.

The marketing team worked at full throttle during the days following the flood, sending out Press Releases, speaking to local media and updating website and Facebook pages with information regarding the need for our audience to contact The Mill regarding re-booking of tickets.

And so the props were packed up and catalogued, the set broken down and returned to the workshop, and the critical sunflower gobos and projection put away safely.

Clare maintained a monthly meeting with cast and crew – more of a social and team-building exercise than actual rehearsals.

Starting our 2013/14 Season in the same vein as we had for 2012/13 with Calendar Girls as our opening show felt a little odd and presentations to the membership came with instructions to ‘pray for good weather’. On a positive note, we had learnt a lot about how to put on the show and built on the work that had been done initially to ‘WOW’ our audiences. As we opened the theatre doors on Saturday 16 November to ‘move in’ there was a palpable hush among the set builders, cast and crew and someone was heard to whisper ‘off we go again!’.

The rain held off (although it was bitterly cold!) and our production sold out completely. The messages of support and congratulation from our audience were incredible and everyone was relieved we had finally managed to present this show – and more importantly raised over £1500 for Leukaemia and Lymphoma Research.

This production personified team spirit for BCP – that that is alive and well in all Drama Companies up and down the land. To those of you still to perform Calendar Girls we wish you all the best and hope you have just as good a time as BCP did – only without the weather.

In 2011 major works were carried out on a flood alleviation scheme for Banbury. This comprised a dam built on the River Cherwell North East of the M40 between the canal and Daventry Road. To be used in the event of particularly heavy rainfall controlling the flow on the river by holding back water, flooding farm land rather than the town centre. There are some photos of work in progress. One can only assume that things would have been worse in 2012 if this scheme hadn’t been completed.

It appears that the high water level at The Mill was not quite as high as it was in 2007 for The Dresser which lost us 50% of performances and stage sets which had to be destroyed due to contamination. In 2012 the water didn’t reach the BCP workshop where we store what we need for the production.