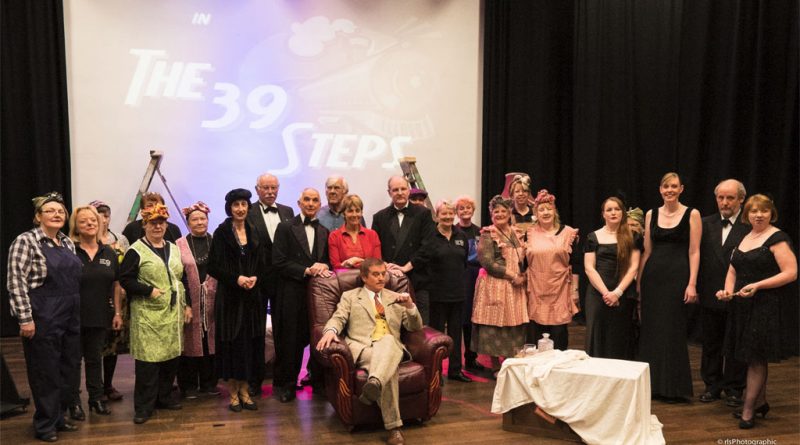 The 39 Steps by John Buchan & Alfred Hitchcock adapted by Patrick Barlow from an original concept by Simon Corble and Nobby Dimon was performed at The Mill Theatre from 22nd to 25th April 2015.

Directed by Chrissie Garrett, the cast was as follows:

Click to see Photos on Flickr with courtesy and copyright of Mike Watling from the
Tech Rehearsal Night and
Dress Rehearsal.

You can find out more about TheThe 39 Steps by John Buchan & Alfred Hitchcock in Wikipedia.

I had seen this show twice before – once in London (where the audience seemed full of tourists who knew the film and didn’t really get the idea that it was a spoof) and a touring production which went down exceedingly well with a Friday night Northampton audience. On both occasions it struck me as a very funny show.

Based on the classic novel by John Buchan and its 3 film adaptions (the most famous by Alfred Hitchcock) this version is by Patrick Barlow, who first made his name as founder of The National Theatre Of Brent, where just 2 performers would re-enact some key moment in history or the theatre in a melodramatic and comic way. (From time to time recordings of the show still appear on Radio 4 – well worth catching.)

Following that lead this 39 Steps spoof is re-enacted by 5 actors, playing over 100 roles between them. Our hero, Richard Hannay (Andrew Whiffin) is the only constant; The Woman (Clare Lester) being, in fact, three different women – secret agent Annabella Schmidt, who winds up murdered in his flat, Pamela, the young woman he meets and involves, very unwillingly at first, in his situation while he is on the run from the police and the farmer’s wife who yearns for city life. A vast array of multiple roles – underwear salesmen, police officers, a German spy, train guard, newspaper seller, a farmer, a hotel keeper and his wife, Mr Memory, etc, etc, etc – are played by the two men described in the programme as Clown 1 ( Dave Smith) and Clown 2 (Nik Lester). This production also involved a radio announcer (John Bennett).

This is a great show – but a large part of its success relies on the 4 actors who are on stage for most of the show. One has a large central role, another has two large roles and the two Clowns have a huge variety of roles which often require them to change character in seconds or even less. All this with the most basic scenery; the actors are totally exposed.

In summary I enjoyed this show, presented as if it were the original 1935 film – there was even popcorn on sale in the foyer! The rest of the audience had a good time too.

Andrew Whiffin did a fine job as John Hannay, a jaded colonial type, looking for an adventure after his return to London. Andrew’s delivery of his lines was just right, nicely accented and clearly spoken, movement just so, played very much as a worldly-wise man of action. He was helped by his costume of a fine tweed suit – exactly the sort of thing a man like Hannay would wear.

I also enjoyed Clare Lester’s performance as Annabella Schmidt, Pamela and the farmer’s wife. A showcase really as Miss Schmidt is some sort of secret agent and German and the farmer’s wife was Scots, whereas Pamela is very much an English rose, unwillingly caught up in something that annoys and confuses her; Clare passed this test very well.

Also appreciated was the way that Andrew and Clare balanced the need for a careful balancing act between needing to present themselves as ‘serious’ characters who were also able to deliver comedy when needed.

Hence the description of the roles played by Dave Smith and Nik Lester as Clowns 1 and 2 – with their far more obvious and numerous comic roles, all played, in one way or another, for laughs. Much of what they did needed to be seen to be appreciated but I especially enjoyed Nik as Mr Memory, the ‘excuse me’ business when the underwear salesmen need to move round a confined railway compartment, the scarily Presbyterian Scottish farmer (Dave) and the hotel owner and his kind-hearted wife.

John Bennett played the role of the somewhat camp Radio Announcer with aplomb.

The show also employed a ‘sound effect orchestra’ which was great fun, as was the use of stage crew to represent station signs, police officers, the headlights of cars chasing Hannay over the moors etc. The very mobile set – in a doubly busy night for the stage crew – was excellent and the show was (with the exception of a kilt, where I think spoofery went a bit too far!) –was well-costumed.

Because of the brilliance of the play and the very hard work of the cast this was a very entertaining show.

I did have an issue with the age of both the principals who, in an ideal world, would both have been younger – I am trying to be honest, not unkind here, and I know from my own experience that this can be a tricky issue for amateur companies.

Nik Lester and Dave Smith both worked extremely hard at their parts which involved a great deal of good comic timing, quick changes and physical theatre. This often came off well but at times (especially the scene at Edinburgh station) things got a bit ragged. There were laughs but, I think, because things didn’t work out, rather than the sharp quick changes that should have been taking place. Professional actors with weeks to rehearse can do this with ease and it’s much harder for amateurs – perhaps slowing down a little might be the answer.

That said, thank you once again Banbury Cross Players for a very enjoyable night out.

Move over Robert Donat and Kenneth More, there’s a new Richard Hannay in town. From the moment Andrew Whiffin stepped onto the stage as the protagonist in this superb production, he was the suave, erudite, well-dressed Richard Hannay we have seen portrayed over the years. Sporting the pencil thin moustache required of the period, Mr Whiffen gave an excellent performance, completely convincing, confident and energetic.

Banbury Cross Players’ third production in their season was The 39 Steps, adapted by Patrick Barlow from the original novel by John Buchan. It provided a hilarious evening of pure entertainment. The action follows roughly (very roughly) Buchan’s original story of Hannay being sort by the police for murder (he’s innocent of course). He flees to Scotland in search of the mysterious baddy with the tip of his little finger missing. He can help our hero with his enquiries.

To start at the beginning, up go the opening credits for the play, projected on the rear wall. Just like the black & White ‘B’ movies some of us are old enough to remember. This is just how it is meant to be. The play is performed as it were being produced as a 1930’s film on a budget, which in itself provides great hilarity with the endless number of props and the shortage of actors. This of course provides a problem for reviewers of the piece. Where the action is a tad suspect and some of the Scottish accents are appalling, ranging from just plain bad to Irish and yes, some American in there methinks, is that meant or not?

Back to the plot. Ably directed by Chrissie Garret, The 39 Steps must have been great fun to produce. The ingenuity of the props crew had to be seen to be believed. Fireplaces doubling for cars, sceneshifters with torches on poles to represent the police searching the moors in the mist, excellent. The lighting plots of John Hicks and Linda Shaw added greatly to the atmosphere and the sound effects provided by the four-piece orchestra led by John McCormick, who was clearly enjoying himself, were spectacular. I would be interested to know how they got their timing spot on.

Clare Lester played a couple of parts, providing the corpse in the first scene and also popping up in various scenes to give Mr Hannay away to the law, until eventually she realises he is telling the truth about his innocence and the network of international spies known as – wait for it – The 39 Steps. If this sounds slightly sombre, forget it, the play is a hoot from start to finish.

Ms Lester was kept busy throughout the exercise and frankly we could have been in the West End judging by the calibre of her performance.

How do you review the other two main performers, Nik Lester and Dave Smith? They had more parts than a Boeing 747, and the quick fire changes they executed, sometimes whilst holding a conversation with themselves added to the fun.

The famous Forth Bridge scene was done well although I would have liked to see some kind of railway footage projected on the back wall to add ambience. The chase over the bridge was excellent and again the prop department came up trumps with the ingenious use of a pair of steps and a ladder.

As mentioned, the idea behind this adaptation of The 39 Steps story is to parody an Alfred Hitchcock film of the time. The play throws in the occasional snippet appertaining to a number of his triumphs. I spotted North by Northwest and Psycho. The use of the Coronation Scot and Dick Barton theme again added to the period of the piece.

In all a cracker of a production. Dave Smith and Nik Lester must have, and should have, been exhausted by the end of the evening. Coats, wigs and kilts in all directions, and I especially liked the homemade bagpipes. OBE’s have been given for less.

My favourite line of the night went something like this:

Woman: My Uncle Bob is a Chief Inspector at Scotland Yard.
Man: Your Uncle Bob?
Woman: Yes
Man: So Bob’s your Uncle.