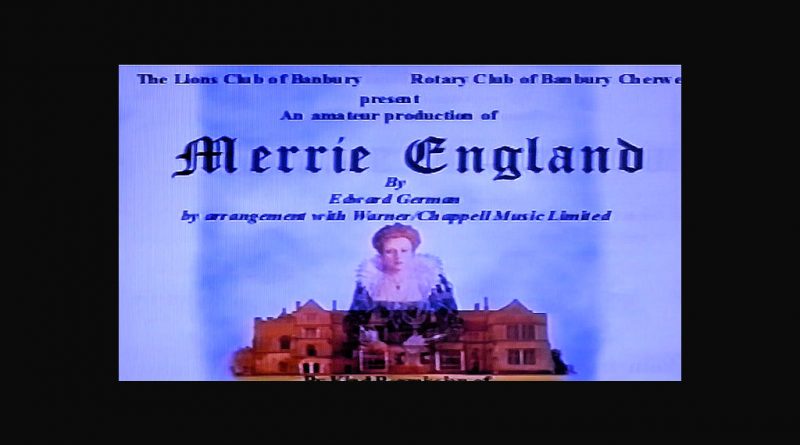 Merrie England was performed at Broughton Castle from 4th to 6th August 2000. It was a joint production.

In October 2019 at a Terriffic Tuesday, Jenny Tustian and Gareth Jeremy presented a talk about “The Shared History of BCP and BOS“. This was illustrated with a video showing an edited extract from Merrie England which was performed at Broughton Castle in August 2000 to celebrate the new millennium and included different community groups from around Banbury.

The Oxford Mail provided this advance publicity which contains detailed information about the production.

The open-air show is staged in the castle courtyard, generously donated by the Lord and Lady Saye and Sele. A 250-strong cast is joined by hunting dogs, scuba divers and Sea Cadets.

The comic operetta, written by Edward German, is set in the reign of Queen Elizabeth I. Packed with intrigue, romance, witches and yeoman, it contains many well-known songs. For example Oh Peaceful England and Jerusalem.

“We decided four years ago to do this production. By sheer coincidence, the opening night is the 100th birthday of the Queen Mother,” explains assistant director Janet Bishop.

The Queen Mum’s banner and coronation song have been woven into the elaborate performance, which also includes an Elizabethan Fair on Saturday and Sunday. “There will be strolling magicians, mummers, Shakespearean actors, madrigal singers, falconry and a band,” she says, ” as well as picnic space and carnival rides.”

Director Andrew Wilson Jenner adds: “This has been an extensive project, involving at least 600 people and the Banbury Operatic Society, Banbury Symphony Orchestra, Banbury Cross Players, Banbury Lions Club, the Rotary Club of Banbury Cherwell and many other groups. Sponsors include Chiltern Railways, the National Lottery and the Cherwell District Council.

Any profits left – after paying the £60,000 production bill will go to a charity chosen by Lady Saye and Sele. “It’s essentially a Banbury production, so it should be a Banbury charity,” she reflects, “perhaps Horton General Hospital Children’s ward.”

If you would like to see the whole video, and you live within easy reach of Banbury, Gareth Jeremy is willing to lend it out, but you will need a working VHS video player. Contact us via our website email contactus@banburycrossplayer.org.uk