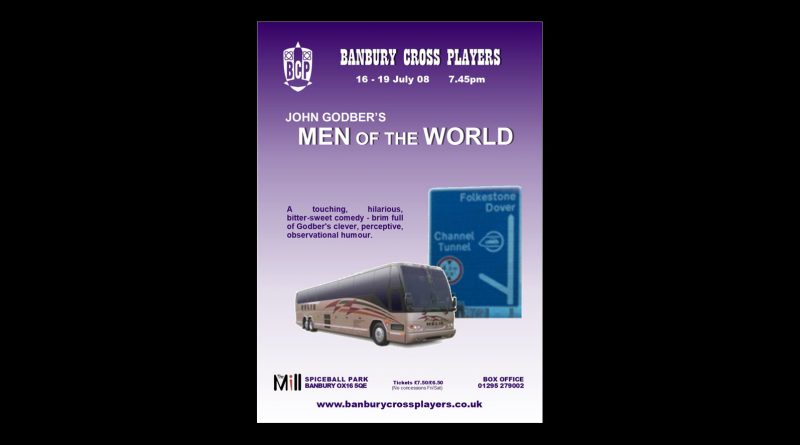 Banbury Cross Players presented Men of the World by John Godber at The Mill Arts Centre in July 2008. It was Directed by Linda Shaw.
The Cast was as follows:

Director Linda Shaw set out her thoughts about this production.

It was April 2006, somewhere between learning lines for Abandonment and designing the set for Sex, Drugs and Rick ‘n’ Noel, that I first put my director’s hat in the Play Selection ring for Men of the World. It would be another 12 months, in the midst of the madness that was The Pocket Dream that Liz picked up the hat and gave it back to me, stamped “July 2008 Slot”.

My original comments on the play included

Categorised as a Play this is not without humour but it does have it’s ups and downs/light and shade .. it made me laugh out loud .. it’s rude .. good old pathos kicks in .. the humour is “Billy Connelly” (my mother laughs despite the bad language) ..we could cast it but the actors would have to want to do the roles because they would need to work hard .. tough but satisfying – all involved would get a real sense of achievement with this play

First there were open auditions (October 2007) well, no, actually, first came the music. I had no idea how difficult it would be to get hold of ALL the Mario Lanza tracks on one CD. Thank heavens for Amazon! In the pursuit of Mario Lanza, I think I’ve joined just about every mp3 download site on the web – Larry would be proud of me. Isn’t it amazing? Twenty years ago, can you imagine finding “Day Trip to Bangor” sung in German? I think the best find was the sheet music for “Pal of My Cradle Days” which came courtesy of E-bay – all the way from Australia. A huge thank you to ‘him indoors’ and his Geordie, Irish-Folk-Singing cousins for providing me with “A Miner’s Life” (taken from The Doonan Family Band’s “Manna from Hebburn” CD – for all those of you who have asked).

To the Auditions then. I wasn’t expecting a massive turnout … and I wasn’t disappointed. Two ladies auditioned at the Members’ Audition. Why only two? Why indeed… From the five people who turned up for the second (Open) audition I got my cast and (as it turned out later) my Prompt. The New Year bought the sad news that Simone (Frank) was ill and wouldn’t be able to do the part.

The Frank audition was one of the toughest I have experienced. Julie R and Julia C agreed to put themselves through the mill in pursuit of bus-driver excellence. I was able to audition them directly against Marc and Heward and see the physical and emotional balance they provided. Those who sat in the audition that night will tell you what fun it was letting three very experienced actors loose with two handbags, a flat cap and their imagination but only ‘him indoors’ can tell you the trauma I went through over the next three days trying to decide who to cast. Both actresses were excellent and there wasn’t a coat of paint between them. Both bought very different qualities to the role and to the group dynamic (which was going to prove vital over the coming months). I agonised over the decision – making lists, scoring them on how they performed at the audition, including my experience of working with them in the past. I even secretly hoped, at one point, that one of them would ring me to say they couldn’t do the role! Suffice it to say, Julie won out in the end but I was very sorry to have had to have decided between them.

The set and lighting design were next. The script intimates a box set but I wasn’t convinced we needed all those flats. The actors would be bringing the colour and structure to the play not their surroundings. In some respects, it was the music that eventually inspired me. Being a teenager of the 80s and a huge fan of synthesizer music (I’ve had the therapy, now, thanks), I was well aware of Kraftwerk’s “The Model” and their hugely successful album “Autobahn”. A trip to the video website YouTube during the witching hours one weekend led me to a video of them live in concert and having seen it – like every good woman shopping – I had to have it. I knew if anyone could get it for me it would be ‘Quickly’ and ‘Slowly’ (I make no apologies for the in-joke but the answer is on the BCP Facebook Group). And how ….(apologies for those of you viewing this in black and white) …

As seen at The Mill …

The two photos sum up the end result but in no way account for the hours of research and hard work by the LX team in order to achieve it. Thanks guys!

Jane had agreed to do props for the show fairly early on. “Not a lot to do” said I “just some suitcases” …

seventeen to be precise. Early in rehearsals we used (Julie’s inspired idea) stiff paper shopping bags. As the weeks went by the shopping bags were replaced by suitcases. By the time production week came around Jane was sick to death of the blasted things having carted them up and down stairs at The Mill and to and from Great Bourton village hall on numerous occasions. Jane perfected the art of stacking them inside one another and loading up cars. I’ve often wondered what people thought as they saw us trotting around and about Banbury – we six and our suitcases. Jane was a great support in rehearsal – always enjoying the humour and ensuring the actors never forgot that the play was funny.

I took Liz up on her kind offer to help with the show and asked her to do costumes. Liz is great to have on your team. She gets things done effectively and with little fuss. And I know getting together the costumes was not without huge effort on her part and at a time when BCP was the last thing she wanted to be thinking about. Coats, scarves, hats, dresses, jackets, ties and, of course, the specially designed, hand-crafted ‘Martin Bobble Hat’ (thanks Connie!) just appeared and were morphed into the production and characters.

Bruce put the cast through their singing paces early on in the rehearsal process and gave Julie the confidence to perform as the cabaret artist Dolly. Mark Neale stoically turned up to three weeks worth of rehearsals with laptop and amp giving the cast the chance to work with the music that would give them many of the cues during the show when there was little else to go on.

I ‘booked’ my Stage Manager early on in the process. Unfortunately, Craig’s work life took an unusual turn but, as only a best friend can, he pulled out all the stops to be there when it mattered. In Craig, the cast and crew had a solid, dependable, non-hysterical support during the week of the show.

I was keen to give some of our newer recruits a chance to experience some backstage “buzz” (after all, BCP’s not just ‘beer on a Tuesday night’). Sam and Vicky ably supported Jane and Liz during the production and it was great to see them involved. As for Matt (who boasts two nicknames in the Society now) I can only thank him for his dogged determination to not let either of the two smoke machines get the better of him and for my delight each day in seeing yet another backstage photo make it onto the BCP Facebook pages.

And so to the cast. What can I say? Thanks Heward for the two speeding tickets. Thanks Julie for all the tea and Thanks Marc for the ten mile walks. My original rehearsal idea had been to introduce the elements of the show gradually – characters, props, suitcases, costume, lines – so as not to overload the cast. We soon realised the difficulty here was that each new element added made the cast forget the previous ones. Introduce the suitcases this week and forget what we did with the blazers last week. Eventually we took the (brave? foolish?) decision to have everything, full-on, all at once – characters, props, suitcases, costume and lines. I wasn’t totally convinced and this approach bought it’s own difficulties too. And just to add to the excitement, Julie spent the first five weeks of rehearsal in plaster and on crutches.

As a director I was pushed to the limit on how best to support the cast. Should we scrap the suitcase moving? Should we rehearse in small blocks of dialogue – giving the actors the opportunity to set the sections into their mind? Should we rehearse whole acts at a time – giving the actors the opportunity to get the flow of the piece in their minds? Do we need another word rehearsal? Should we abandon the drivers’ jackets? Do we have enough time? Can we get another rehearsal room anywhere? I realise now that a huge part of the role of Director – once you’ve stopped the actors from bumping into the furniture – is to be a constant support to the cast, encouraging them to have faith in themselves and each other when they have none. Something I should have remembered at the Dress Rehearsal.

Neil, as prompt, did a sterling job of keeping track of where the suitcases and actors were when we left off at the last rehearsal so we’d know where to start at the beginning of the next. Having an experienced actor as prompt was more beneficial than I anticipated and Neil was able to offer ‘notes’ of his own during rehearsal having spotted exactly where the words were turning to worms.

I’m sure you’ve all played the ‘trust’ game. You stand in front of someone, close your eyes and let yourself fall back into the arms of the person standing behind you. It’s only someone you REALLY trust that you can do that with. I think during the preparation for this show we all stood in front of each other at some time and fell back. I was very fortunate to be working with a dedicated crew and three very experienced actors who had faith in me and in each other and come opening night the trust paid off.

I’ve said it before and I’ll say it again. I’ve loved and (at times) hated the journey that was Men of the World but I can’t think of any other team I’d rather have been on that journey with.