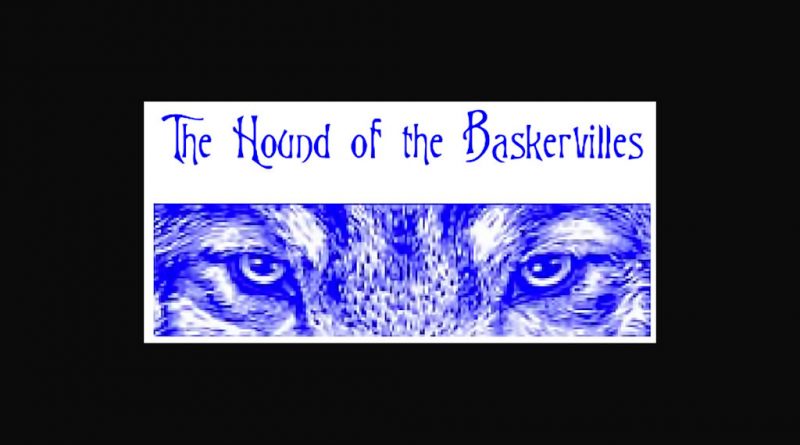 Banbury Cross Players presented The Hound of the Baskervilles adapted by Simon Williams from the novel by Sir Arthur Conan Doyle at The Mill in November 2005. The play was directed by Tony Neal. The Cast was as follows

The Hound Of The Baskervilles

The Hound of The Baskervilles

I read the book in my youth, two or three times, saw the original film with Basil Rathbone and Nigel Bruce in 1939 and have seen a subsequent film and at least two T.V. productions. It is a very melodramatic story – as are most by Conan Doyle – he lived in the Age when melodrama and staged exaggerations were popular.

Whenever I think of it I conjure up gloom, horror and ‘nasty things in the cupboard’. It lends itself to filming bogs and moors with strange howls and laments in the background, all of which tend to be a bit ‘passe’.

I was therefore intrigued to see how this atmosphere would be attained on the Amateur Stage without trick photography and sound effects. I believe there have been semi-professional attempts to produce it on stage – one I know was in 1996.

And so I felt it was very brave for the BCP to take on such a risky enterprise. Mark Neale obviously ‘had a ball’ with the howls, bangs and clashes and sound that increased and decreased at exactly the correct levels and times. John Hicks also must have thoroughly enjoyed his creativity with the lighting. The only technical point I would make is that I think there was just a bit too much dry ice – it nearly overwhelmed us all at times!

Top marks must go to Richard Ashby for the scenery, also to the Stage and Properties teams.

I think this was very well adapted by Simon Williams who hit the precarious balance between ‘hammy’ (nowadays) melodrama and humour with emotional acceptance of modern-day audiences in just the right way.

I could see an excellent full house starting off by possibly being a little cynical in their acceptance to being very amused and, yes, also being caught up in the considerable tension, although farcical, that was created by Tony Neale’s interpretation and the band of mostly very experienced Thespians who clearly understood this interpretation and became completely immersed in it .

One of the most important vehicles of achieving this was the very slick and surprising scene changes which were smoothly enacted and managed to hold the tension and/or humour from one to the other.

I was astonished at the number of cast in the programme, until I realised that there was a lot of doubling up, but the final curtain was impressive! I must make the point that the whole cast worked extremely well together and it is impossible to mention everyone – I saw no annoying weak spots and felt Tony Neale had done a magnificent job, both in logistics and melding a very complex action into a most entertaining whole and I came away feeling warmly purring and that I had just seen something very worthwhile as,
obviously did the whole audience judging by their comments and smiles as they went home!

I think it would be unfair to pick out individuals except to say that as well as excellent team-work from all the cast the main characters were all right into their personalities and my vision of Sherlock Holmes and Dr. Watson will now be of Heward Simpson and Andy Allen! The speech and accents were well put over – I was only a little perturbed by Julie Robinson, who gave her usual very believable performance – except (if she was trying to emulate Bruce Walton’s good Scots accent, she did sound sometimes like a mixture of Yorkshire and Lancashire, with some Scottish overtones (Sorry, Julie – I am a Scot!)
I could feel that this was just the sort of fare the audience needed and surely, financially, this will be a winner!?

Congratulations to all concerned!