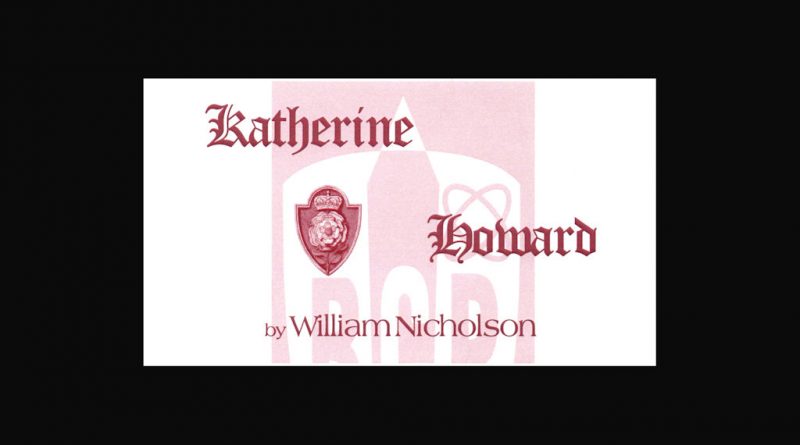 Banbury Cross Players presented Katherine Howard by William Nicholson for their July 2005 production at The Mill in Banbury. The story of Henry VIII, his fourth and fifth wives. Katherine Howard was directed by Bruce Walton.

I think it is alright to call this a Review not a criticism as, very unusually, I found hardly anything to criticise. Perhaps I should call it a Report?

This, without doubt, was the best and most consistent throughout production I have seen from the BCP. The ‘Star of the Show’ was undoubtedly the Director, Bruce Walton, and, probably because of him, the costumes. I have rarely felt such a firm, strong and intelligent grip of a play in action and I wonder however many hours of rehearsal this took as his attention to every little detail of movement, grouping , expressions, actions and pace was impeccable. Helped, of course, by an intelligent and very experienced cast, which brought the whole evening’s performance up to the highest level of professional expertise. I also shudder at the thought of how much the fantastic costumes cost to hire!!

There was, of course, economy in the simple, but very effective set, black curtains, which one was never aware of as the costumes continually provided a feast of colour to one’s eyes. The curtained double bed in the centre was a clever idea. I thought it was a jousting tent when the lights went up and at the end it was brilliant (was this intentional?) that when Katherine’s head was chopped off the curtains around her made a noise (eerie and reverent) exactly like the
moment when the curtains close around the coffin in a crematorium.

I was a little concerned to read in the Banbury Guardian that this play was for adults only and not suitable for children. In this modern world however, I did wonder if it should have been unsuitable for those over 70 and was the normal fodder for contemporary children? It was indeed bawdy, but that was the period, and there was no physical explicit sex on stage, though the repartee was certainly earthy and sexy in the way it is nowadays in all the media! I was very impressed with the movements of all the courtiers and the chanting and wondered how much work had been put in wearing similar costumes in rehearsal as their movements were so majestic and elegant and right for the period.

I felt that young Tom (Tristan Pate) should have had a personal dresser as he was the only one who obviously found wearing Elizabethan clothes difficult. They didn’t seem to quite fit him and at the end he wore his hat at an un-Elizabethan and rakish angle. He made a fine effort and in the first love scene was very sensitive, but on occasions slightly showed up as a boy against the very experienced and mature cast. The Elizabethan music was very atmospheric and it was excellent to have it playing in the bar before the play and helped to attune us all to being Elizabethans!

I cannot praise Marc Griffiths. performance as Henry too highly. It was awe inspiring and the change of mood, tempo and dominance was terrific. I think it was partly the way the play was written (very sensitively and with great historical aplomb), that I found myself being empathetic towards Henry and understanding his humanity, despite his many cruel actions and belief in those who were manipulating him, and his interpretation of what made the man tick I found stimulating and thought-provoking.

When the lovers first appeared in the gloomy blue light I thought what a beautiful voice Katherine Howard (Michelle Mirams) had and when she appeared in the light I saw that she was indeed beautiful and was so elegant in the myriad of costumes she glided about in and her facial expressions, particularly when she was being tender, were very heart warming. Hers was a performance of a very high standard and I should think every man in the audience has fallen in love with her!

Thomas Culpeper (Tristan Pate) as mentioned before was rather immature for the part and needs to cultivate stage presence – but he has the obvious ability and will I am sure become a very good mature actor.

Linda Shaw’s Anne of Cleves was wonderful – she is very talented – and the climax of her part was when she shrieked with joy at the conditions of her divorce!

The Duke of Norfolk (Colin Galloway) gave a mature interpretation of a two-faced and rather soured man – his voice was extremely clear and moving, and he succeeded in making us dislike him, though making us listen intently – and even more so can be said of Tony Neale who carried out the process of making everyone loathe him in a very intellectual way.

June Ronson (Lady Jane Rochford) as usual made me wonder if she has studied method acting. She was Lady Jane and everything she said held me agog, and her final collapse was spine-chilling!

Marilyn Fairbairn (Mrs. Mary Hall) gave what was the nearest thing to explicit physical sex with the most extraordinary demonstration of married breathing, but her incredible convolutions created a burst of spontaneous applause it was so funny!!!

All the other characters were very well done and the overall grouping when they were on was excellent. The ending was so dramatic and – yes – beautiful – with Henry’s costume dazzling us all in the spotlight and making us, despite ourselves, warm to him strongly.

If the BCP continue to produce plays of this standard, both in acting and technology, I think the RSC at Stratford-upon-Avon may have cause to be worried!.

Well done everyone – I haven’t enjoyed myself so much for years!!

KATHERINE HOWARD – made us think different things in all sorts of ways. The sexy noises travelled throughout the theatre and made people laugh as they gradually came to a halt. The words they used explained the play in a way that everyone could understand the plot. Katherine Howard is interesting history and it’s fun to learn about. If you did not watch the spectacular show then you missed the amazing performance performed by excellent actors.