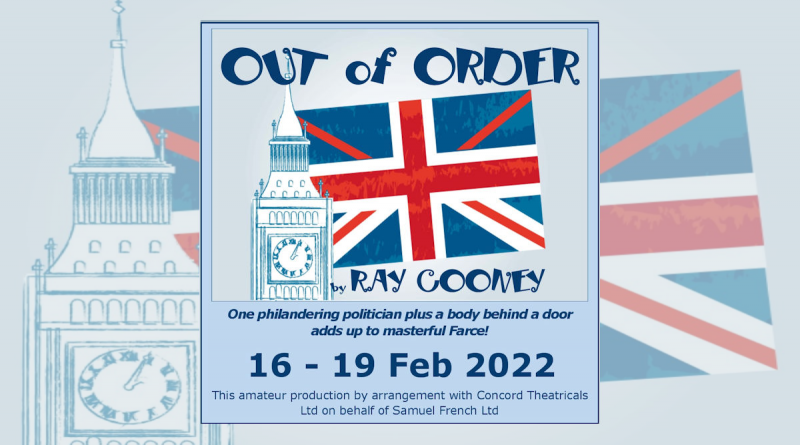 Out of Order by Ray Cooney was performed at The Mill Arts Centre, Banbury from 16th to 19th February 2022. The Cast was as follows:

When Junior Minister Richard Willey plans to spend the evening with Jane Worthington (a typist for the Opposition) things go disastrously wrong starting with the discovery of a body trapped in the hotel’s only unreliable sash window. Desperate to get out of a sticky situation, Richard calls his PPS, George Pigden, to help. Richard’s lies sink him into further trouble. Things go from bad to worse with the arrival of Ronnie, Jane’s distraught husband. The addition of an unscrupulous waiter, Mrs Willey and Nurse Foster, things really come to a head.

Award-winning, fast and furious masterful farce. Don’t expect an easy time in rehearsal. Farce is one of the most challenging genre to pull off but when it works, the audience go mad for it, and you will have great fun. (There is also a key backstage role of “Chief Sash Window Operator”!)

Photos – with thanks to Mike Watling