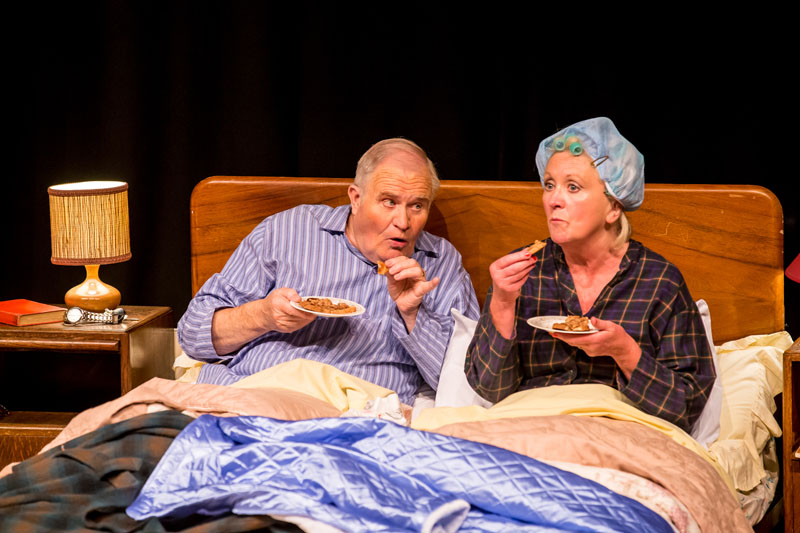 Bedroom Farce by Alan Ayckbourn was our October 2014 production at The Mill Theatre, Banbury.

Directed by Trish Thompson, the Cast was as follows:

From stripes to plaid to chiffon – there’s a definite hint of “pyjama” around BCP this week. Director, Trish Thompson, elegantly attired in hers introduced the (similarly pyjama-clad) cast of BCP’s forthcoming production of Alan Ayckbourn’s “Bedroom Farce” to a packed audience at The Mill this week at BCP’s Season Preview. So impressed were the audience that tickets for the production were sold on the night! The Production team have been working non-stop to pull together the required number of beds, bedside tables, lamps and other assorted bedroom scenery in addition to gaining the generous support of Banbury’s West Cornwall Pasty Co.

Bedroom Farce by Alan Ayckbourn introduces Trevor & Susannah, whose marital problems doom their friends’ evenings to disaster as they descend on everyone in turn – leaving complete chaos in their wake in this hectic and hilarious comedy.

So believable it hurts…

Banbury Cross Players’ production of Alan Ayckbourn’s Bedroom Farce might appear as a fluffy, feather-filled comedy, but under the sheets it touches on the nerves of the vapid and ritualistic nature of many human relationships so hard it hurts.

The show opens with Ernest (Peter Bloor) and Delia (Janice Lake) getting ready for a night out at a restaurant with Ernest more concerned about a leaky section of guttering than Delia’s gossiping about her son’s failing marriage.

The scene switches to a second bedroom where Nick (Andy Crump) is laid out in bed overreacting like only an attention-seeking man can to a strain in his hack, making outrageous noises one suspects are designed to deter his wife Jan (Helena Boughton) going to a party where her ex-husband Trevor(Rob Hall) is going to make an appearance.

Then we move to the ostensibly harmonious love nest of newlywed Malcolm (Tom Perry) and Kate (Tanis Hamilton Everest). The couple are prepared to host a party but with some dread realise they have invited Trevor and Susannah, who are embroiled in a messy marriage meltdown.

As the evening unfolds, the cast slickly execute the evermore complex inter weaving relationships between couples with Trevor having a dalliance with the unhappily married Jan. Malcolm ignoring his obviously love-seeking wife by building a wonky DIY desk, and Ernest and Delia putting up Susannah who arrives at their house in the early hours after witnessing Trevor’s infidelity.

The expertly executed farce reveals how all too easily relationships can lose their spark when people stop really talking to each other and get distracted by dreams that the grass is greener. Bedroom Farce showed at the Mill Arts Centre last week.