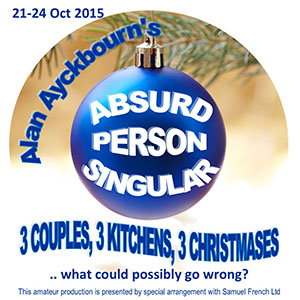 Absurd Person Singular by Alan Ayckbourn was performed at The Mill Arts Centre from 21st to Sat 24th Oct 2015.

Divided into three acts, Absurd Person Singular documents the changing fortunes of three married couples. Each act takes place at a Christmas celebration at one of the couples’ homes on successive Christmas Eves.

Directed by Brenda Williams, the Cast was as follows:

These photos were taken by Simon Lutter.