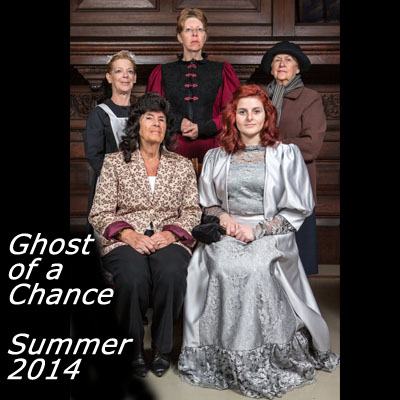 BCP ON THE ROAD

Ghost of a Chance written by Brian J Burton was Banbury Cross Players’ Summer 2014 festival play. It was also performed at our season preview at The Mill in September at the start of the Season 2014/2015.

Directed by Andy Crump, the cast was as follows:-

The following article was issued to the local press.

Always keen to branch out, Banbury Cross Players are heading off this summer to take part in THREE local Drama Festivals with their One Act Play Brian J Burton’s Ghost of a Chance – a Victorian tragedy re-enacted in a haunted house.

When Mrs Dean discovers that one of her ancestors is supposed to haunt an old deserted house, she arranges with the caretaker to spend thirty minutes in the house alone at night. As she watches in silence, dramatic events of two days in 1860 are re-enacted by the former occupants of the house. She leaves having discovered the true reason for the reported haunting…….or does she.

Director, Andy Crump, has been putting his cast through their paces in readiness for their stint of travelling to theatres new. “Festivals are a great challenge for actors and production team alike, performing in unfamiliar venues, but BCP members have been working hard to ensure the performance is as slick (and spooky!) as it can be. We look forward to hearing what new audiences think”.

Drama Festivals are a great opportunity to see a wide range of theatre in a short space of time – and are great value for money! See below for venue dates/details.”