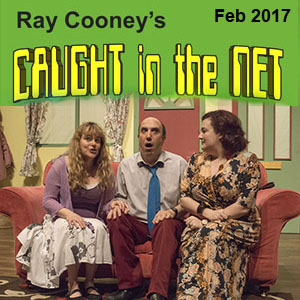 Ray Cooney’s Caught in the Net

directed by Terry Gallager, performed from 1st to 4th February 2017.
“A Masterclass in the art of Farce”

Bigamist taxi driver John Smith keeping his two families in different parts of London, both happy and blissfully unaware of each other. However, his teenage children, a girl from one family and a boy from the other, have met on the Internet and are anxious to meet in person since they have so much in common name, surname and taxi driving dad!

Keeping them apart plunges John into a hell hole of his own making. His lodger Stanley could be a savior, but he is about to go on holiday with his decrepit old father who turns up thinking he is already at the guest house. The situation spirals out of control as John juggles outrageously with the truth.

The Cast was as follows.

Photos with thanks to Mike Watling.