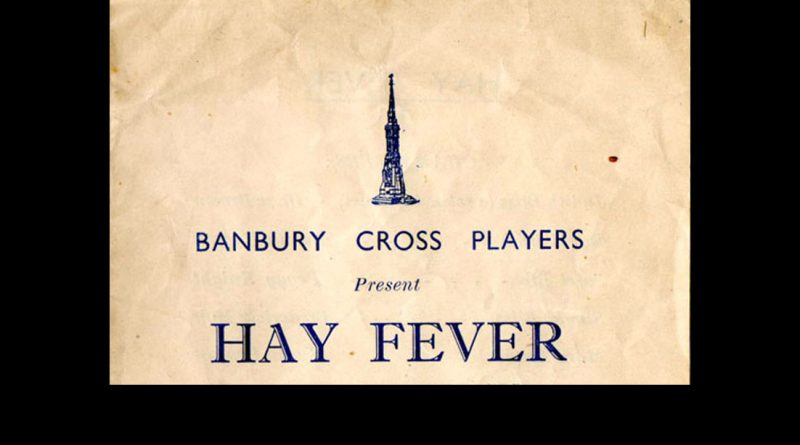 Brian Little a prolific writer for Banbury Guardian sadly died in March 2019. In 2015, at the time of our 70th Anniversary, he wrote the following about the origins of Banbury Cross Players.

All the world’s a stage

This year is the 70th Anniversary of the Banbury Cross Players. It is an appropriate time to reflect on the fascinating origins of this society and to reveal how these were linked to the arrival of the Northern Aluminium Company in the 1930s.

A prime mover within the process by which the Players first appeared on the local scene was Peggy Knight who had moved from London with the Accounts Department of the Northern Aluminium Company. She had an intense enthusiasm and active love of the stage.

During the evening of December eighth 1944 Peggy gathered around her just sufficient people to read the parts comprising Noel Coward‘s ‘Hay Fever‘. The meeting place was Peggy’s flat close to the White Lion Hotel in the High Street. Present were Olive Brown (NAC Director’s secretary), Susan Penrose (daughter of Banbury’s senior GP), Gwyneth Wilks (a founder member of the Players and secretary to Owen Reid, Banbury’s Town Clerk), Richard Croucher (NAC office manager) and Clayton Wentworth who claimed that he had been a chorus member and dancer in New York musicals.

This was the gathering that encouraged Neville and Nan Turner to add their voices to the play readers. They had not got very far into the play reading before Peggy said ‘Let’s do it!’ Key roles then fell into place.

Sholto Douglas, Bloxham School Chaplain was a logical choice as Producer and Johnny Coombs with a background of Oxford Stage experience was the man to manage affairs after curtain up.

Years on from these earliest decisions Neville Turner has reflected on the parts he and his wife Nan were offered. His wife was assigned the role of Clara the maid whilst Neville was left to rue selection for the part of David Bliss (an age discrepancy issue).

A Name for the Company

Formal identification of this emergent group had to await early 1945. It was then that sentiment overruled reason in Peggy Knight’s mind when she conjured up names such as ‘The Good Companions’ and ‘The Strolling Players’. The Ultimate choice of Banbury Cross Players came as a relief to Nan and Neville. More than that the agreed title may have been what attracted Peggy and Spen Lester who joined in time to play the parts of Olive Peel and Gordon Whitehouse in Hay Fever.

Rehearsals for the production, which was to be staged at Bloxham School, were mostly held in Christ Church vicarage at the top of Old Parr Road in Banbury. Neville records modestly that the group made up with enthusiasm what it lacked in stage experience. Fortunately help and guidance came from Sholto who had directed school plays.

Getting to Bloxham in 1945 both for actors and audience was more than interesting. Lack of cars meant out by bus and back on a late train along the Chipping Norton line. Most of the audience who lived in Banbury either walked or cycled.

Friday and Saturday 20th and 21st April will be forever imprinted on the minds of surviving members from the early days. Admission was free but the Horton Hospital benefited from a collection.

Memories of the production were recorded in a scrap book by founder member Gwyneth Wilks who was Honorary Secretary from 1948 to 1952. The Press congratulated the company ‘on embarking on a production of the quality of “Hay Fever” and for performing it so ably. The scenery, dresses, make-up and lighting were all of an excellent standard. Owen Reid as Chairman of the Society acknowledged the reception and thanked the stage team of helpers. Saturday night bouquets were well earned.

Seventy years on the BCP are still left to reflect on the 1948 comments made by Margaret Johnson, Mayor of Banbury, at a Crown Hotel dinner when she stressed the need for a theatre in the town. Since that time the Players have strutted their stuff on many different stages. Their needs are still to a degree unfulfilled. However the flame that Peggy Knight ignited in 1944 still lives on in members young and old.

You can see The History of Banbury Cross Players on this website.